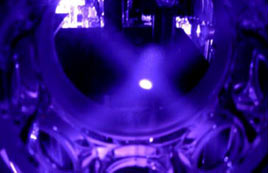 Statutes of the laboratory

The Kastler Brossel Laboratory (LKB) is a Mixed Unit of Research depending on the Ecole Normale Supérieure (ENS), the National Center for Scientific research (CNRS), the University Pierre & Marie Curie (UPMC) and the Collège de France.

LKB is one of the main actors in the field of fundamental physics of quantum systems, covering a broad spectrum of research ranging from fundamental tests of quantum theory to its applications.

Sixty years after its foundation by Alfred Kastler and Jean Brossel, the Kastler Brossel Laboratory continues to play a central role in the understanding of the quantum phenomena in the world and the essential outcomes of the quantum universe.

Quantum gases The spectacular development of techniques allowing one to manipulate and cool atoms with electromagnetic fields has led to the emergence of a new research line, devoted to quantum gases. In such atomic assemblies, the collective behaviour of the particles is very different from the one predicted by classical physics. This quantum regime is reached when the de Broglie wavelength, which characterizes the size of an atomic wave packet, is larger than the average distance between particles. A central line in our research consists in using these quantum gases with well controlled properties, to simulate situations that are inspired from condensed matter physics, and that are not yet properly understood. Quantum optics and quantum information The Kastler Brossel Laboratory is one of the main actors of the booming fields of quantum optics and quantum information. Present at the onset of both cavity quantum electrodynamics and quantum optics, it still carries pioneering works in these fields. The research line Quantum Optics and Quantum Information brings together 4 groups investigating the fundamental concepts of quantum physics and the implications of quantum fluctuations. Among their research themes: ideal and non-demolition measurements, entanglement and decoherence, non-classical states generation, sensitivity limits in measurements and measurements at the quantum limit, quantum memories and devices for quantum information, Casimir physics and fluctuation induced phenomena.

Atoms in dense or complex media Several members of Laboratoire Kastler Brossel make use of atomic physics tools and methods to study dense and complex systems, or conversely apply condensed matter know-how and techniques to study properties of atoms. They are members of the "Polarised helium, quantum solids and fluids" research team. Testing of fundamental interactions and metrology High precision measurements allow to test fundamental theories such as quantum electrodynamics or gravitation, and to determine the fundamental constants of the physics. These research fields are animated by two groups with special focus on the metrology of simple systems such as the hydrogen atom, cold atoms or ions. Frontiers and applications Several teams explore the frontiers of their research areas, through broad international collaborations or industrial partnerships, and develop methods relevant for other elds or innovative technologies, building on their expertise in fundamental physics.

On a national level the laboratory has developed numerous collaborations, in particular with the National Agency of Research. The laboratory is member of the ENS-Institute for fundamental Physics (ENS-ICFP), “laboratory of excellence”. It is also included in two “initiatives of excellence” and two “equipment of excellence” projects. Laboratory members participate in numerous international learned societies, serve in leading positions for national learned societies (SFP, SFO) and institutes (IFRAF: Francilien institute for research on the Cold Atoms), and participate in evaluation committees (CoNRS, ANR, AERES,…).

More than 100 scientific publications during the last 5 years were published in journals with high impact (Nature, Science, Physical Review Letters). Publications issuing of LKB are cited more than 6500 times a year.