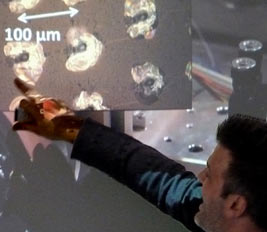 The first year offers a wealth of lectures covering a wide range of topics in modern physics, from fundamental interactions to biophysics, and also several aspects of quantum mechanics and condensed matter physics, to name just a few. Students follow those lectures, chosen according to their interests and for a total of 30 ECTS during the first semester. The second semester is devoted to a 6-month research internship in French or foreign laboratories, in any field of physics or its interfaces.

Please refer to the page How to apply for informations regarding the recruitment process.

Camille SARDIN Administration Officer in charge of the relationships with lecturers camille.sardin@phys.ens.fr 01 44 32 25 98

The courses of the first year of Master ENS-ICFP are freely chosen by the students. During the first semester there are five teaching units of 6 ECTS each :

Click on the name of a course to get its description.

There is also the possibility to do a supervised research project, considered as a full course (6 ECTS).

One teaching unit = one full course (6 ECTS) or two half courses (2x3 ECTS) at will. At most 9 ECTS can be obtained by following courses not organized by the Masters program.

It is indeed possible to follow other lectures, in particular in some M2 of associated universities (Interface physique-biologie, Océanologie et météorologie, Géodynamique et physique de la terre, Mécanique), conditioned on the agreement of the faculties in charge of the Masters program and of the lecture followed.

Students must have chosen their five teaching units by the end of September, inquiries will be made via email by the people in charge. Individual meetings will be organized if necessary.

Each of the five teaching units M1–M5 are attributed a mark on a scale of 20, the mark of the first semester being their average : MA = (M1 + M2 + M3 + M4 + M5) / 5. If this average is strictly less than 10, the student must take resit exams in each of the courses for which he/she obtained a mark lower than 10. In such a case the committee is entitled to forbid the student to go abroad to do his internship.

Weekly attendance of the Student seminar is compulsory for the validation of the first semester ; students will have to write brief reports on some of the seminars.

SECOND SEMESTER (30 ECTS) The second semester is fully devoted to an internship done full-time in a research laboratory, most often abroad (in Europe but not only) or in France, in an academic or industrial environment. The internship starts after the winter holidays (end of January) and lasts until the summer (end of July). The work undertaken is evaluated from a written report describing the results obtained and an oral presentation (mid-September), leading to the mark (on the scale of 20) for the second semester : MB = INTERNSHIP. 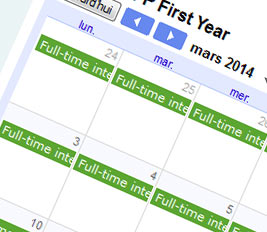 The second semester of the first year of the Master’s consists entirely of a training internship, usually abroad, in a research laboratory. This is a full-time undertaking. The internship is normally spent in an academic, government-supported, or (...) | ↦ Read more