Scientists of the LIGO and Virgo Collaboration, including the Optomechanics and Quantum Measurement team of the Laboratory Kastler Brossel, have observed for the first time the gravitational wave emission from a merger of two Neutron Stars (not two Black Holes that were the previous detections). In another first, this source of gravitational waves also produced electromagnetic signals, observed in the hours, days and weeks following by a collaboration of 60 Earth and Space-based observatories. This ensemble of observation, marking the start of a new type of « Multi-messenger » astronomy, has given a multitude of results, from the resolution of the enigma of short gamma-ray bursts to the origin of the heaviest chemical elements (such as lead, gold or platinum), to the study of the properties of neutron stars, to an independent measurement of the speed of expansion of the Universe. Around 10 scientific articles have been released on the 16th of October 2017 detailing these many results, and summarised in the Science Summaries. 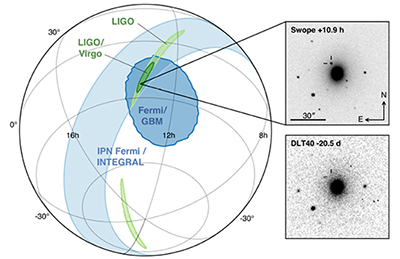 The figure above summarises the results for source localisation in the sky. The results from the LIGO and Virgo gravitational-wave detectors are shown in green (pale green regions for LIGO only, dark green when we add information from Virgo). The results from the gamma ray detectors are in blue (dark blue for Fermi-GBM and light blue for Fermi and INTEGRAL). The upper inset image shows the host galaxy NGC 4993, and is the first electromagnetic image of a gravitational-wave source, taken by the Swope telescope 10.9 hours after the binary neutron star merger (indicated by the cross-mark to the upper left of NGC 4993, and is not present in the lower image, taken 20.5 days before the merger).