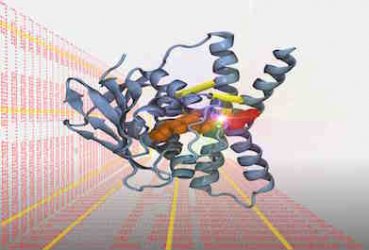 Over the last years, biological research has been revolutionised by experimental high-throughput techniques. Unprecedented amounts of data are accumulating, causing an urgent need to develop computational modelling approaches to unveil information hidden in raw data, and to help to increase our understanding of complex biological systems. Inference approaches based on statistical physics have played an important role across diverse systems ranging from proteins over neural networks to the collective behaviour of animal groups.

To give a specific example, proteins show a remarkable degree of structural and functional conservation in the course of evolution, despite a large variability in amino-acid sequences. Thanks to modern sequencing techniques, this amino-acid variability is easily observable, contrary to time- and labour-intensive experiments determining, e.g., the three-dimensional fold of a protein. I will present recent developments around the so-called Direct-Coupling Analysis [1,2], a statistical-mechanics inspired inference approach, which links sequence variability to protein structure and function. I will show that this methodology can be used to (i) to infer contacts between residues and thus to guide 3D-structure prediction of proteins and their complexes [3], (ii) to infer conserved protein-protein interaction networks, and (iii) to reconstruct mutational landscapes and thus to predict the effect of mutations [4]. Beyond a direct bioinformatic interest of such findings, they provide us also insight into underlying principles connecting protein evolution, structure and function.

Biography : Martin Weigt works as a Professor at the Laboratoire de Biologie Computationnnelle et Quantitative at the UPMC, Paris, where he has built up the team "Statistical Genomics and Biological Physics". Based on his original formation in theoretical statistical physics, he is developing statistical inference and modelling approaches for bio-molecular data.