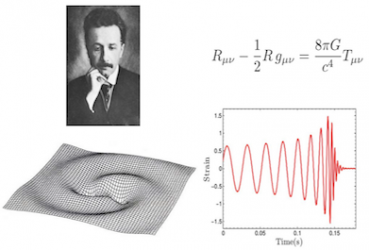 General Relativity was finalized by Albert Einstein a century ago, in 1916. Two of the most novel predictions of General Relativity were also discovered in 1916 : Black Holes (Schwarzschild, January 1916) and Gravitational Waves (Einstein, June 1916). It took more than 50 years to grasp the physical significance of these theoretical discoveries. The recent discovery of GW150914 by the two LIGO interferometers has brought the first direct evidence for the existence of black holes, and has also been the first observation of gravitational waves in the wave-zone. After reviewing the conceptual foundations of General Relativity, the talk will explain the theoretical developments on the motion and gravitational radiation of binary black holes that have been crucial in interpreting the LIGO event GW150914 as being emitted by the coalescence of two black holes. Some of the mysterious physical properties of black holes will also be reviewed.

Biography : Thibault Damour is a theoretical physicist, professor at the Institut des Hautes Etudes Scientifiques, and a member of the Académie des Sciences. He is known worldwide for his innovative work on black holes, pulsars, gravitational waves, and cosmological aspects of string theory. He has received numerous awards, including the prestigious Einstein medal.