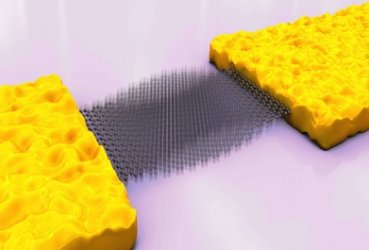 What is the difference between a graphene mechanical resonator and a music drum ?

When a graphene layer is suspended over a circular hole, the graphene acts as a drum. Likewise, a suspended nanotube vibrates as a guitar string. However, one important difference between a graphene resonator and a music drum is the mass, since graphene is only one atom thick. Another difference is the quality factor Q, which becomes extremely large in graphene resonators at cryogenic temperature (Q above 1 million). Because of this combination of low mass and high quality factor, the motion is enormously sensitive to the environment - the mechanical eigenstates are extremely fragile and easily perturbed by the measurement. But, if graphene and nanotube resonators can be properly harnessed, they become incomparable sensors of mass and force. From a fundamental point of view, nanotube and graphene resonators are very interesting to study the physics of noise and dissipation.

Biography : Adrian Bachtold graduated Ingénieur Physicien at the Ecole Polytechnique Fédérale de Lausanne in 1996 and obtained his PhD from the University of Basel in 1999. He was a post-doctoral researcher at Berkeley and Delft. In 2001 he became Chargé de recherche CNRS at the Ecole Normale Supérieure in Paris. In 2005 he went to Barcelona as a CSIC professor and later on as a ICN professor at the Catalan Institute of Nanotechnology. In 2012 he joined the Institute of Photonic Sciences as an ICFO professor. He is the principal investigator of the Quantum Nano-Mechanics group. He is the recipient of several awards, including the IBM award of the Swiss Physical Society, the medal of the CNRS, and an EURYI award. He was awarded an ERC grant.