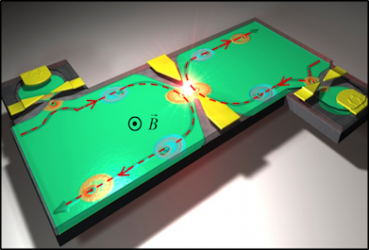 Quantum effects have been studied on photon propagation in the context of quantum optics since the second half of the last century. In particular, using single photon emitters, fundamental tests of quantum mechanics were explored by manipulating single to few photons in Hanbury-Brown and Twiss and Hong Ou Mandel experiments. In nanophysics, there is a growing interest to translate these concepts of quantum optics to electrons propagating in nanostructures. In particular, in ballistic quantum conductors, the propagation of electrons is not hindered by collisions and the phase of the wavefunction is preserved on a few microns which corresponds to the typical size of the conductor. One can then manipulate and study the coherence properties of electron beams in analogy with the study of light beams in optics. In the first course, I will briefly review the framework of electron optics and illustrate it with experimental realizations with a specific emphasis on single electron experiments in electron optics setups. However, electron optics experiments differ strongly from their optical counterpart as electrons are interacting fermions. In my second course, I will discuss the effects of the Coulomb interaction, which lead to the emergence of collective modes (consisting of several electron/hole excitations of the Fermi sea). This contrasts with the simple non-interacting picture derived from optics and used to understand interference effects in quantum conductors. In particular, I will discuss how the Coulomb interaction and the emergence of collective modes lead to the decoherence and eventually the destruction of single electronic excitations.

Biography : Gwendal Fève is a Professor at University Pierre et Marie Curie and performs his research in the mesoscopic physics group of the Laboratoire Pierre Aigrain. He is a leading expert in time dependent transport in quantum conductors and, in particular, single to few electron manipulation in ballistic conductors. He has recently been awarded an ERC consolidator grant for research in quantum electronics and is a member of the Institut universitaire de France.