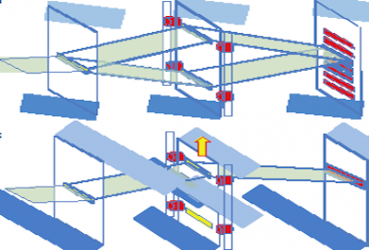 Novel research opportunities are currently explored in several laboratories around the world, were either synchrotron, laser, free electron laser, or combinations of such radiations are being used to investigate key aspects of radiation-matter interaction. High-resolution soft X-ray spectroscopies of isolated species represent powerful investigation tools of their fundamental properties, in particular of the ultrafast dynamics generated by inner-shell excitation [1]. Ultrahigh resolution electron spectroscopy and electron – ion momentum correlation measurements are now being routinely performed at the PLEIADES beamline, in operation since 2010 at Synchrotron SOLEIL (France).

With the help of PLEIADES, we were able to confirm the original theoretical prediction by Gel’mukhanov’s group [2] and demonstrate experimentally for the first time the existence of a rotational Doppler broadening [3] of all molecular electron spectra. Moreover, we showed that due to this effect the use of polarized high-energy radiation in the X-ray range, confers a site-selective character to the otherwise non-selective molecular valence photoionization [4], and reveals the character of the molecular orbitals [5].

In the last few years we have also developed a research program where electron spectroscopy is applied to the structural characterization of gas phase species, such as molecules, clusters or nanoparticles (see Ref. [6] for a review). We have shown that ultrahigh resolution resonant photoemission can be used for molecular potentials’ imaging [7], in particular for new electronic states, unobservable in direct photoemission.

Finally, we applied Auger electron – ion coincidence measurements to the investigation of fundamental quantum phenomena revealed by the ultrafast dissociation dynamics on the femtosecond time scale of simple diatomic [8], or polyatomic [9] core-excited molecules. In the latter case, it was possible to discover an original ultrafast dissociation mechanism, where the quick rotation of light moieties in a complex core-excited molecule was shown responsible for the destruction of the molecular edifice before electronic relaxation has taken place [9].

A selection of results will be presented during this colloquium, which will be concluded with the perspectives offered by novel sources, such as the Extreme Light Infrastructure, capitalizing on recent advances in the high-power lasers technologies and opening a new era in a variety of fields related to radiation-matter interaction.

Biography : Catalin Miron graduated from ENS Lyon and obtained his Ph.D. in Atomic, Molecular and Optical (AMO) Physics from Paris-Sud 11 University in 1997 as a CEA fellow based at LURE Laboratory, in Orsay. He spent two years at Uppsala University as a Swedish Natural Research Council postdoctoral fellow working with molecular high-resolution electron spectroscopy at Max-Laboratory in Lund. In 2000 he joined the CEA – Saclay to develop synchrotron radiation based studies of the ultrafast decay dynamics of core-excited species. In 2003 he joined Synchrotron SOLEIL as the project leader for the soft X-ray high-resolution spectroscopy beamline PLEIADES dedicated to the study of dilute matter (isolated atoms, molecules, ions, clusters, nanoparticles). While coordinating a research group (PLEIADES) at Synchrotron SOLEIL for about ten years, he was also the head of the AMO Scientific Section of SOLEIL between 2010 and 2013. He is now the Scientific and Technical Director of the Extreme Light Infrastructure (ELI) – Delivery Consortium, coordinating the implementation of the three pillars of ELI, the first international laser user facility, in Czech Republic, Hungary and Romania.