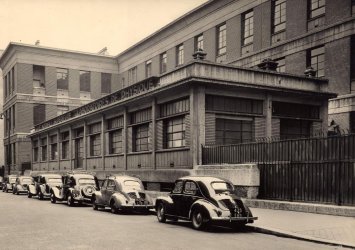 History of the Department

Around World War one, the Physics laboratory at ENS was based in a much too small space, quite derelict. In spite of these difficult conditions, it had a remarkably brilliant activity under the lead of H. Abraham and A. Cotton.

H. Abraham is well known for his design of the T.M. triode, which was one of the first practical amplifier tubes. This invention allowed the development of the French radioelectric industry. A. Cotton is well known for his fundamental studies of magnetic birefringence or circular dichroism. He left ENS and founded new research teams at Meudon Bellevue.

Before world War II, the physics laboratory was chaired by E. Bloch and G. Bruhat. E. Bloch was a spectroscopist, known for his work on spark spectra, as well as for the Abraham and Bloch electronic oscillator. G. Bruhat was mainly in charge for the design and construction of the ’new’ laboratories, in rue Lhomond, which have been used by the Physics department since then. He has produced an important work on polarimetry. He is also the author of a famous series of textbooks, which have been and still are a reference.

Research at the physics department is deeply affected by World War II. His three former directors, Abraham, Bloch and Bruhat die in concentration camps. «The Prix des trois physiciens» was installed after the war in memory.

The physics laboratory, installed in its brand new building was led from 1945 to 1973 by Y. Rocard, assisted by A. Kastler.

Y. Rocard attracts four main research groups at ENS. That of A. Kastler and J. Brossel develops radio-frequency atomic spectroscopy, optical pumping and focuses soon on the emergent laser physics. P. Aigrain initiates semiconductors physics, in close connection with the newly born semiconductor industry. J.F. Denisse and J.L. Steinberg study interstellar radio-electric emissions in the 25cm-1.5m band with the Nançay radio-telescope. M. Levy starts a theoretical physics group, which rapidly gathers thirty people. He took an active part in the creation of the CERN. In this period, large equipments are installed in the department. Two particle accelerators, a van de Graaf (now at Jussieu) and a Cockroft-Walton are installed in the greatest hall. A wind tunnel, 50 m long and 1.5 m in diameter, is set-up. It will be extensively used to test the Tancarville suspended bridge structure. Nitrogen, hydrogen and finally helium liquefiers are installed. For a time, a team has also worked on the cosmic rays, under the guidance of P. Auger. A 30 m deep well has been dug under the second underground level for these experiments! A geophysics laboratory was also started, with strong relations with military and civil nuclear research in other places. A third level is created on top of the existing building and the teaching activities move in.

From 1953 on, the creation of a large particle accelerator in France is discussed. The decision to build a linear machine, powered by Klystrons, on the new Orsay campus is rapidly taken. This machine is inaugurated in 1956 and led to the creation of the « Laboratoire de l’accélérateur linéaire », whose director, from 1961 on, is A. Blanc-Lapierre. The theoretical team of M. Levy joins this laboratory in 1959. A group of theoreticians led by P. Meyer comes back in the department around 1970 to start the Laboratoire de Physique théorique.

The team of theorists Mr. Levy joined the laboratory in 1959. A group of theorists led by P. MEYER return to the department in 1970, founding what is now the Laboratory of Theoretical Physics.

After Y. Rocard, the Laboratory is chaired by J. Brossel from 1973 to 1986. During this time, the geophysics laboratory moves to Pierre and Marie Curie University. Radioastronomers (Laboratoire de radioastronomie), theoretical physicists and a meteorology laboratory join ENS. The research on atomic laser cooling and semiconductors heterostructures is thriving.

E. Brezin is the director from 1986 to 1992 (he became later president of the CNRS and of the French Academy of Sciences). It is during his chairmanship that the Laboratory of physics has become a full Physics Department, with reinforced links between the various research activities. The Laboratoire de Physique Statistique is created, followed soon after by the Laboratoire de la Matière Condensée, renamed recently Laboratoire Pierre Aigrain. Many new teams join the department in this period.

P. Lallemand chairs the department from 1992 to 1994. New research techniques emerge, with scanning microscopy in particular. The study of biological membranes and DNA molecules starts the biophysical activity at the department.

S. Haroche becomes director in 1994. The Laboratoire de Spectroscopie Hertzienne, founded by J. Brossel, is renamed Laboratoire Kastler Brossel. C. Cohen-Tannoudji, the leader of the cold atoms group, is awarded the Nobel prize in 1997. In September 2012, Serge Haroche was elected by his peers to the position of administrator of the Collège de France just before being awarded the 2012 Nobel Prize, together with David Wineland, for their work on the manipulation of individual quantum systems. New construction works are undertaken. For the second time since the original construction, the external aspect of the building changes with the erection of new office space above the workshop on Rue Lhomond. This new space, inaugurated in 2000 by M. Voos, the new department director, allows for a further development of the research activity.

From 2005 to 2009, the Physics department is headed by Jean-Michel Raimond, professor at UPMC and researcher in the Laboratoire Kastler Brossel. The department infrastructure evolves notably, with the opening of a modern clean room facility, integrated in a consortium of clean rooms inside Paris (SBPC). Three mechanical workshops are regrouped and installed in a renewed room. The programming phase of a large scale building renovation supported by a CPER grant made it possible to envision the future shape of the department. Scientifically, to the ordinary harvest of first class results, one may add the CNRS Gold Medal awarded to Serge Haroche.

Since 2016, Jean-Marc Berroir has been in charge of the department. Four of the department’s historical laboratories (LRA, LPS, LPA, LPT) merged in January 2019 to become the ENS’s new Physics laboratory (LPENS).