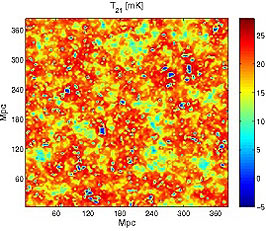 One of the most ambitious goals of astronomy today is to detect radio signals from the very early Universe, when it was between 150 million and one billion years old. At this epoch (referred to as “the epoch of cosmic reionization”), the radiation emitted by first stars and their remnants heated and ionized the pristine cosmic gas, consisting mainly of neutral hydrogen. The epoch of reionization can be explored using radio telescopes to probe the global spectrum and fluctuations of a specific emission line of atomic hydrogen, namely its 21-cm transition.

It was previously thought that most of the X-ray photons that heated the gas had short mean free paths and, thus, were efficiently absorbed without loosing their energy to cosmic expansion. Therefore, the heating of the gas in this scenario occurred much earlier than ionization ; and the predicted spectra of the redshifted 21-cm line show a clear fluctuation peak at the central stage of reionization, when 50% of gas was ionized. However, accumulating observations hint that high-energy X-rays with long mean free paths may actually dominate at early times.

In our paper ”The observable signature of late heating of the Universe during cosmic reionization” (Nature, 5th of February 2014) we find that this phenomenon substantially changes the expectations for cosmic heating. In this scenario, the photons are less efficiently absorbed and loose much of their energy due to cosmological expansion. As a result, the heating of the gas is delayed, which in turn leads to a much more complex signature from the epoch of reionization than previously expected. In particular, now the predicted fluctuations in the redshifted 21-cm signal show a distinct minimum (instead of the previously expected peak) that marks the late rise of the cosmic mean gas temperature. Our new results are bound to alter the way we can probe processes during early stages of reionization.

Figure 1 : Temperature maps of the redshifted 21-cm signal, shown relatively to the cosmic microwave background radiation (CMB), at the moment when only 14% of cosmic gas was ionized. The color scale indicates the temperature in millikelvin units with negative values corresponding to absorption of 21-cm wavelength, positive - to emission, and zero to the patches which have already been ionized and do not have neutral hydrogen. On the left panel we show previous expectations with early heating, where most of the gas is hotter than the CMB and thus is observed in emission. The right panel shows our new results where heating is delayed and the gas is seen partially in absorption (the dark blue regions).