During the the twentieth century, a race for speed in telecommunication technologies has driven research and technical evolution. But recently, a new crucial question appeared: how to ensure the security of data flows? Is it possible to guarantee the inviolability of a telecommunication based on the laws of physics? A possible solution relies on the use of single photons to carry information. But how to implement it? Several teams of researchers and among them the "Nanooptics" team at LPA led by Christophe Voisin, start to reply to this question, both fundamental and with a wide application scope.

The amount of information exchanged in our societies grows continuously. To date, light is the main vector of this information through optical fiber networks. In future telecommunication means, the requirements in terms of security and confidentiality will require the implementation of new protocols based on the quantum properties of light. The reliability of these quantum cryptography protocols is based on the ability of certain light sources to emit on demand one and only one photon per excitation cycle, as opposed to conventional sources that tend to emit photons in packets. This is called photon antibunching.

Many physical systems have already been explored to achieve this function: in particular, fluorescent molecules isolated in a matrix, semiconductor nanoparticles and semiconductor quantum dots, or certain crystalline defects, natural or induced, in various matrices such as diamonds, boron nitride or lamellar materials such as transition metal dichalcogenides [1]. However, for wide-scale use in optoelectronic devices, it is essential that these single photon sources have certain characteristics. In particular, the wavelength of the emitted light must correspond to telecommunication standards (near 1.3 or 1.5 μm), where the losses of silica optical fibers are minimal to allow transmission over long distances. These line losses are a particularly critical problem for single photons since re-amplification techniques along the path (repeaters) are problematic in this case. Furthermore, it is desirable that these photon sources can be electrically powered (rather than optically, less easily integrated) and finally, operation at room temperature would be a considerable asset.

The quantum emitters mentioned above may have some of these properties, but not all simultaneously. Carbon nanotubes, on the other hand, have formidable assets to meet this challenge: the cylindrical arrangement of the graphene sheet (mono-atomic layer of carbon) presents, for certain folding geometries (called chiral species), the characteristics of a semiconductor material with a direct gap inversely proportional to the diameter. Thus, by selecting the species whose diameter is of the order of 1.1 nm, an emission wavelength in the telecom bands is obtained. Moreover, unlike other emitters operating only at cryogenic temperature, the quasi-one-dimensional geometry of the nanotubes confers a great robustness to their optical properties against temperature because the charge carriers are strongly bound by Coulomb interaction. Finally, the 1D geometry of these structures, which can extend over several microns, make it possible to build electrical contacts to cause the emission of light by electroluminescence.

In the review article « Perspectives » published in Nature Materials, the LPA Nano-optics team led by Christophe Voisin in collaboration with the teams of Stephen Doorn at Los Alamos National Lab (USA) and Ralph Krupke and Wolfram Pernice at the Karlruhe Institute of Technology (Germany), describes the considerable progress made recently for the use of carbon nanotubes as a source of single photons and the most promising ways to improve their performance. This progress is essentially based on three axes:

The three co-authors teams have indeed made major advances in these areas recently.

The first observation of a strong antibunching of photons emitted by a carbon nanotube was carried out at cryogenic temperature, the effect fading at higher temperatures. The currently accepted interpretation is based on the trapping of excitons (hydrogen-electron pair-hole linked by coulombic interaction) on local potential minima related to the irregularity of the interface with the matrix. These trapped excitons then behave as a two-level pseudo-system emitting antibunched photons. These shallow traps (about ten meV) do not maintain a good confinement at room temperature and the continuum of states accessible to thermally trapped excitons considerably reduces the antibunching purity of the emitted photons. The strategy developed by S. Doorn’s team involves grafting a very small number of aryl-type chemical groups onto the nanotube crystal lattice (ideally one per nanotube) using a diazonium chemical reaction. This chemical function then behaves like a deep trap (> 100meV) for the excitons of the nanotube that remain trapped up to a temperature greater than 300 K. This results in a antibunching level (the purity of the single photon source) greater than 98% at room temperature. In addition, this chemical graft induces a redshift of the emission wavelength of the order of 100meV, adjustable according to the detail of the chemical function. This achievement allows to obtain a source of single photons in the telecom bands, from abundant and readily separable chiral species by simple and effective physico-chemical post-growth sorting techniques. Functionalized carbon nanotubes are the only emitters of single photons that operate both at room temperature and in telecom bands.

A key parameter of a single photon source is its brightness, defined as the probability of actually collecting a photon in a given polarization state per emitter excitation cycle. A conventional technique to improve this brightness is to couple the emitter with a photonic micro-cavity, that is to say a Fabry-Perot type resonator having a high quality factor and a low mode volume (compared to λ3). Under these conditions, the diagram and the spontaneous emission rate of the transmitter are strongly modified by the Purcell effect [2], which allows to make the emission predominant in a particular photonic mode and to increase the radiative emission rate of the transmitter. In the case of nanotubes, this coupling is delicate because of the random location of the nanotubes and the variability of their emission wavelength depending on the local environment; the LPA team has performed a deterministic coupling of carbon nanotubes with a fiber micro-cavity, whose original geometry (developed in collaboration with the Atom-chips team at LKB) [3] allows to adjust the resonant frequency to that measured for each emitter. Under these conditions, the photons are emitted in the cavity mode with a probability greater than 98% with a polarization degree higher than 90%. Moreover, the Purcell factor reaches values ​​of the order of 60, which makes it possible to obtain brightnesses of the order of 0.4 quite comparable to those of the most advanced single photon sources such as semiconductor quantum dot sources. Moreover, the demonstration of an original coupling of excitons to 1D phonons of the nanotube has made it possible to exploit a quantum electrodynamic effect to tune the emission wavelength of the source of single photons over a large spectral window, offering many perspectives in terms of multiplexing for example. 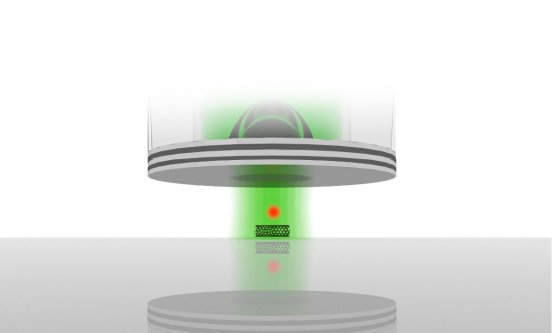 A prototype of integrated photonic device

The third element of these recent advances, carried out in R. Krupke’s team, concerns the ability to position a carbon nanotube on a photonic crystal with nanometric precision by electrophoresis and then to affix electrical contacts to it. This fully integrated system, based on silicon waveguides, has demonstrated the emission of single photons by electroluminescence in a photonic circuit. This circuit also integrates single photon counters with superconducting technology (SSPD), making it possible to perform two-photon coincidence or interference measurements and could prefigure what would be a photonic chip of quantum processing of information based on carbon nanotubes in the future [4]. 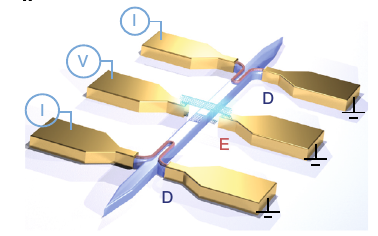 Finally, these encouraging progresses open the way to even more advanced uses if we manage to master the pure dephasing phenomena induced by the random interaction of the excitons with the matrix, in order to produce a so-called indistinguishable photon flow. Several ways are suggested based on physical methods (quasi-resonant excitation, metallo-dielectric resonators, and so on) or physicochemical (coating in chiral polymers of poly-fluorene type capable of freezing certain modes of vibration of nanotubes to increase the Debye-Waller factor or "neutral" polymers that reduce electrostatic fluctuations in the vicinity of the carbon nanotube). 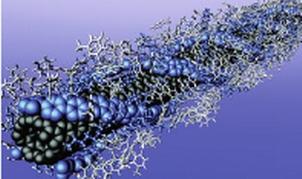