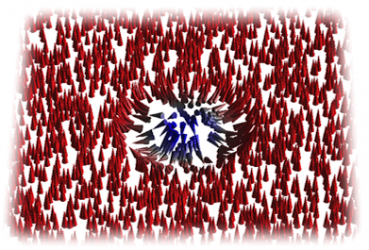 From the basics of spintronics to some recent developments toward spinorbitronics

Classical spintronic devices use the exchange interaction between conduction electron spins and local spins in magnetic materials to create spin-polarized currents or to manipulate nanomagnets by spin transfer torques. This fundamental phenomena has led in the last two decades to important breakthroughs for cutting-edge applications in Information and Communication Technologies. A novel direction of spintronics – that can be called spin-orbitronics - exploits the Spin-Orbit Coupling (SOC) in nonmagnetic materials instead of the exchange interaction in magnetic materials to generate, detect or exploit spin-polarized currents. This opens the way to spin devices made of only nonmagnetic materials and operated without magnetic fields. Spin-orbit coupling can also be used in magnetic materials to create new types of topological objects as the magnetic skyrmions or the Dzyaloshinskii-Moriya domain walls. After an introduction of basic concepts of spintronics and some of its applications, I will review recent advances in two directions of spin-orbitronics: 1) Magnetic skyrmions: The magnetic solitons are topologically-protected localized spin windings that exhibit fascinating physical properties and present large potential in highly energy efficient applications for the storage and processing of information. Up to now however they had been observed only at low temperature in a few exotic materials and ultra-thin films. I will show that they can be found at room temperature in multilayers in which the symmetry breaking by interfaces induces strong Dzyaloshinskii-Moriya Interactions (DMI). These findings open the road to room-temperature skyrmion spintronics. 2) Conversion between charge and spin currents by SOC: I will present a review of spin-orbit effects allowing the conversion of charge current into spin current (or vice-versa), by the Spin Hall Effect in bulk materials or by Rashba effects at interfaces. I will then briefly discuss the motion of magnetic domain walls and switching of nanomagnets by the resulting current-induced SOC torques.

Biography: Dr. Vincent Cros was appointed in 1998 as CNRS researcher in the joint CNRS/Thales research lab (Palaiseau, France) that one of the pioneer groups in the field of spintronics. Since 2000, he is leading there the research activities on spin transfer effects and its related potential applications to radiofrequency spintronic devices. His current research interests include: spin transfer induced motion of single or coupled magnetic solitons, nonlinear phenomena such as parametric excitations or synchronization induced by spin torque, influence of spin-orbit torques on the magnetization dynamics and more recently the physics of magnetic skyrmions. In 2013, he received the Carnot prize from the French Academy of Sciences for his work in spintronics.