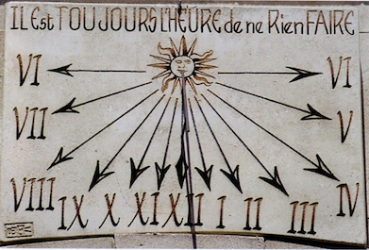 During the 20th century, traditional computer science considered time only from the performance angle, i.e., as a major complexity measures for algorithms, circuits and programs. But the explicit handling of time and events has become essential nowadays, as shown by many examples : the real-time programming of cyber-physical systems in avionics, automotive, robotics, physics experiments, etc. ; the fine-grain synchronization of computers and telephones through the networks ; new time-aware replicated data bases ; computer music ; and the difficulties in transmitting time-dependent data such as audio and video on time-unaware networks. We explain why the classical view of time based on real numbers and the “arrow of time” is far from sufficient in Computer Science where we need much more multiform and hierarchical views of time and temporal events. Such views ground the synchronous languages (Esterel, Lustre / SCADE, etc.) now used routinely in safety-critical systems and also applicable to other fields such as Computer Music and web orchestration. Finally, we show that standard mathematical simulation systems are unable to correctly handle the mixed continuous / discrete behaviors often found in the simulation of physical systems, and discuss solutions for this annoying problem.

Biography : Gérard Berry is Professor at Collège de France, where he holds the “Algorithms, Machines and Languages” Informatics Chair since 2012, after having held there two yearly chairs in 2007-2008 (How and Why the World Becomes Digital) and 2009-2010 (Modeling and Mastering Computation). He is member of Académie des sciences, Académie des technologies, and Academia Europaea. He received the Gold Medal of CNRS in 2014. Gérard Berry graduated from Ecole Polytechnique in 1970 and began research in Computer Science at that time at Ecole des mines and INRIA, first in Paris and then in Sophia-Antipolis from 1977 to 2001. From 2001 to 2009, he acted as Chief Scientist of the Esterel Technology company. From 2009 to 2012, he acted as INRIA Research Director and President of the INRIA Evaluation Committee. His main research areas the design and formal semantics of programming languages, the study of their relation with mathematical logic, and the design and implementation of formal languages and verification tools for embedded systems, digital circuits, computer music, and web orchestration. He is the main creator of the Esterel synchronous reactive language, implementation and toolset. He is also interested in the role of Computer Science in all other sciences.