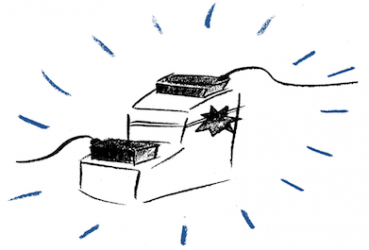 LEDs for lighting - the physical and materials basis

The award of the 2014 Nobel prize for Physics to Akasaki, Amano and Nakamura "for the invention of efficient blue light-emitting diodes which has enabled bright and energy-saving white light sources” illustrates the worldwide societal impact of nitrides. Nitride based LEDs allowed a revolution in lighting efficiency as semiconductors can in principle convert electrical power into light with a 100% efficiency. It illustrates that nitrides semiconductors were not an obvious materials candidate for the blue and green spectral ranges, due to major materials problems such as lack of substrates and difficulty to obtain p-doping. In the ‘80ies, II VI materials seemed a much better bet due to the availability of substrates and good initial quantum efficiency (IQE). Also, it was later discovered that nitrides suffered large strains and large thermal coefficient mismatch with substrates, and high spontaneous and piezo electric internal fields detrimental to radiative recombination. These difficulties were solved progressively, or were bypassed, up to a laboratory performance in the 50% conversion efficiency range, however not in commercially compatible conditions. The major advances were in materials quality leading to IQEs up to 90%, and photon management strategies leading to light extraction efficiencies also in the 90% range. However, despite the remarkable achievements of the pioneers and their followers, producing devices with unmatched performance, there are still scientific and technological roadblocks to reach the physical limits of nitride devices, and more generally of solid state light emission. This presentation is focused on the physical and materials basis enabling light-emitting diodes (LEDs), and the numerous ongoing scientific challenges encountered in their application to solid-state lighting (SSL). I will start with a description of semiconductor basics, pn junctions, (double heterostructures (DHs), quantum wells (QWs), and previous works on IR or red light emitters. I will then introduce what is so special with blue emitters, and with nitrides.

Biography: Claude Weisbuch is a “Directeur de Recherche” (emeritus) at the Centre National de la Recherche Scientifique (CNRS), Ecole Polytechnique, and a distinguished professor in the materials department of University of California at Santa Barbara. He has been at Universite Paris VII (1969-1979), Bell Laboratories (1979-1981), Saint-Gobain (1981-1983) and Thomson-CSF (now Thales) (1983-1992). He was “directeur scientifique” (chief scientist) of Délégation Générale pour l’Armement (procurement), ministry of defense, France, from 1992 to 1998. He founded in 2002 a high tech company, Genewave, Paris, devoted to fluorescence based molecular diagnostics systems.