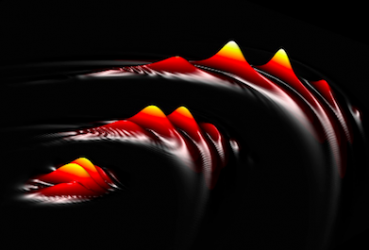 The vast majority of physical phenomena is Nature involve out-of-equilibrium systems. Resolving the temporal evolution of excited systems is essential to understand of the dynamics of these processes. Generally speaking, the smaller the size of a system, the smaller the typical time scale of its dynamics, and the more challenging it is to resolve experimentally. For instance, the motion of nuclei in molecules and solids typically occur on the scale of picoseconds to femtoseconds (1 fs=10^-15 s). Resolving such dynamics has been one of the major achievements of ultrafast science in the last decades, made possible by the advent of femtosecond lasers, short enough to take ‘snapshots’ of these fast events in so-called pump-probe experiments. A major challenge for ultrafast science is now to resolve the fast dynamics of electrons in matter, occurring on the sub-femtosecond time scale. This requires generating attosecond (1 as=10^-18 s) pulses of coherent light, so short that the usual technology of ultrashort lasers becomes totally inadequate. In this talk, I will explain how the first two hurdles in this quest for ultrashort times –i.e. the generation, and then the accurate measurement, of attosecond light pulses- have been taken in the last decade. This has involved a broad range of simple and intuitive ideas ranging from linear and non-linear optics, to quantum physics, signal processing and even plasma physics.

Biography : During his PhD, Fabien Quéré studied the mechanisms of optical breakdown of dielectric solids induced by femtosecond laser pulses. He was then a post-doctoral fellow in Ottawa (Canada), where he contributed to the development of the first methods for the temporal measurement of attosecond pulses of light. In 2003, he became a tenure researcher at CEA Saclay, where he made further significant contributions to attosecond metrology. He then focused on the study of new sources of attosecond pulses of light, in particular on high-harmonic generation from plasmas at ultrahigh laser intensities. In 2010, he received a grant from the European Research Council to support his research on this topic. This remains of his main subjects of interest, together with the metrology of spatio-temporal couplings of high-power femtosecond laser beams and their use for the control of high-intensity interactions.