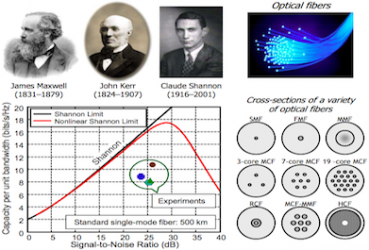 The Ultimate Limit of Optical Fibers to Carry Information

A network of fused-silica single-mode optical fibers forms the backbone of the worldwide communication infrastructure. The maximum rate of transmission of information over such fibers has increased by four orders of magnitude over the last three decades. A question naturally arises : is there a fundamental limit to the maximum achievable transmission rate, or capacity, of single-mode fibers ?