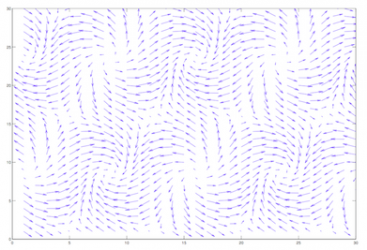 With the theoretical and experimental discoveries of topological insulator, topology has become a popular subject in condensed matter physics. Topology being itself a very broad field, I will focuss on the concept of vector bundle, which turns out to be quite useful to understand many interesting physical systems. The first, well known example, is the band structure of free electrons in a periodic solid. The discovery of the integer quantum Hall effect led to the remarkable identification of the Hall conductance with a topological invariant (Chern number) of the vector bundle associated to filled bands. A similar situation occurs in so-called Chern insulators. A great contribution of Kane and Mele has been to discover in 2005 that band structures of time reversal invariant systems are characterized by finer topological invariants, which are connected to the presence of protected edge states. The second part of this mini-course will present the case of spin textures near integer filling of a Landau level in a strong magnetic field. I will show that the formation of these textures is most naturally understood in the framework of geometric quantization, which involves two complex line bundles over the plane : one associated to the projection onto the lowest Landau level, and one describing the spin texture. Geometric quantization will be used once more to describe the collective modes around such textures. This mini-course will be as self contained as possible. The only pre-requisites are some familiarity with band theory for particles in periodic potentials and the Landau levels for a particle in a uniform magnetic field.