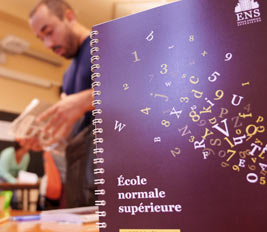 The ENS diploma comprises a master’s degree and additional ‘in-house’ education. The ENS diploma is usually awarded after three years of study at ENS

The student already in possession of 120 ECTS (European Credit Transfer System) can achieve a Licence i.e. Bachelor’s degree, and next obtain a Master’s degree, which will amount to a total of 180 ECTS (L3+M1+M2). In addition, the achievement of the ENS diploma compels to acquire 72 “ENS credits”, freely distributed during the three years of studies. At least a third is chosen outside of the Master’s main field. A coherent two thirds in another field constitutes a “secondary discipline”.

The ENS diploma is usually awarded after three years of study at ENS. Elèves normaliens are awarded it at the end of their period at ENS, ie at the end of the fourth year. Exceptionally, the ENS diploma can be obtained after only 2 years of studies (upon condition of obtaining those 72 “ENS credits”), by those French and Foreign students who joined the ENS at a Master level.