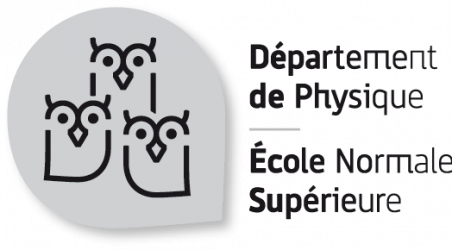 A little bit of history :

The Physics Department at ENS is represented by a logo known as the "three owls". This logo was created in 1960 by Yves Rocard, who was director of the Physics Department between 1945 and 1973. The logo is an iconographic representation of an object (three stuffed owls) which has been present in the Department Director’s office since its creation. Gradually, the three stuffed owls became THE symbol of the Department, to which its creator, Yves Rocard, and previous directors remain very attached. However, this logo, set in the history of the Department, has raised several questions about its history and its meaning. Testimonies have been gathered from current and former researcher-teachers in the Department to attempt to better understand the symbolism behind this logo. These were:

Pierre Baruch (Emeritus professor at Paris Diderot University, former member of the Department who completed his PhD under the supervision of Yves Rocard). Pierre Baruch himself gathered testimonies between 2007 and 2008

The logo created by the successor to the 3 Physicists

Yves Rocard (1903-1992) was a student of the Ecole Normale Supérieure. He was a brilliant researcher and a talented teacher. He split his professional career between Higher Education and Research in the industrial sector; a sector in which he made considerable progress in the field of radio-electricity and the mechanics of vibrations. His career was particularly remarkable during the Second World War, during which he was appointed research director of the free French Naval forces under General de Gaulle. After the armistice, he held the post of Director of the Physics Department between 1945 and 1973, thus following on from the 3 previous directors of the Department (Henri Abraham, Eugène Bloch and Georges Bruhat who had died deported during the war). His scientific and military titles gave him great authority, which he devoted to the development of the Physics laboratories (updating the experimental material, developing research teams and themes, in particular radio-astronomy, theoretical physics and nuclear physics).

Symbolism of the Owl

The owl has long been the symbol of wisdom. It is linked to the Greek goddess Athena, patron of the Arts and wisdom, of defensive warfare and intelligent activity. The owl is also the symbol of science, of knowledge and learning. In addition, it is the emblem of a number of institutions (schools, universities). The French Minister for Higher Education and Research was even inspired by it when creating the trophy for the "Goût des Sciences" award. This award is given yearly in recognition of the best initiatives and publications in the field of science.

According to research, it seems that the choice fell naturally on the owl because a physicist, particularly an experimental physicist, is a scientist who tends to be more active and productive at night, just like the owl! Why 3 owls? Doubts persist today, and the mystery remains unsolved. Nevertheless, we have selected the following three explanations as the most likely:

The 3 owls could be the representation of Yves Rocard’s 3 deputy directors. The three stuffed owls appear to have been a present from a Japanese delegation to Yves Rocard.

The 3 owls could represent the 3 levels of education offered by the Department at the time: Bachelor, post-Graduate and PhD

Finally, the 3 owls could be a symbolic memorial to the 3 Physicists who created the Department and who died during the war. The logo even inspired the creation of the "3 Physicists award".

A new more dynamic and modern logo with cleaner lines:

To re-create the visual identify of the Physics Department at ENS, the Guerillagrafik Agency chose to create a specific typographic character for the department, with reference to the simple and clean lines of the visual universe of Physics, while also giving it graphical details reminiscent of the department’s historical logo with its 3 owls. This character is known as GGhibou (GGowl).

During the initial briefing, the Agency was asked to base its proposal on the original logo, which was very dear to members of the department, and very symbolic to them. Guerillagrafik therefore revised the three owls by building them only from elements of the typographic character GGhibou. The idea was to redesign the logo while distancing it from the initial illustrative and comic-book appearance and taking it closer to physics, which is a fundamental science, with its constructed, straightforward and clean-lined graphics, which sticks to the essentials.

Thus, the new version of the logo offers a dynamic, modern and more straight-laced version of the three owls, closer to the field of activities within the department, while maintaining a respectful link to the previous version.